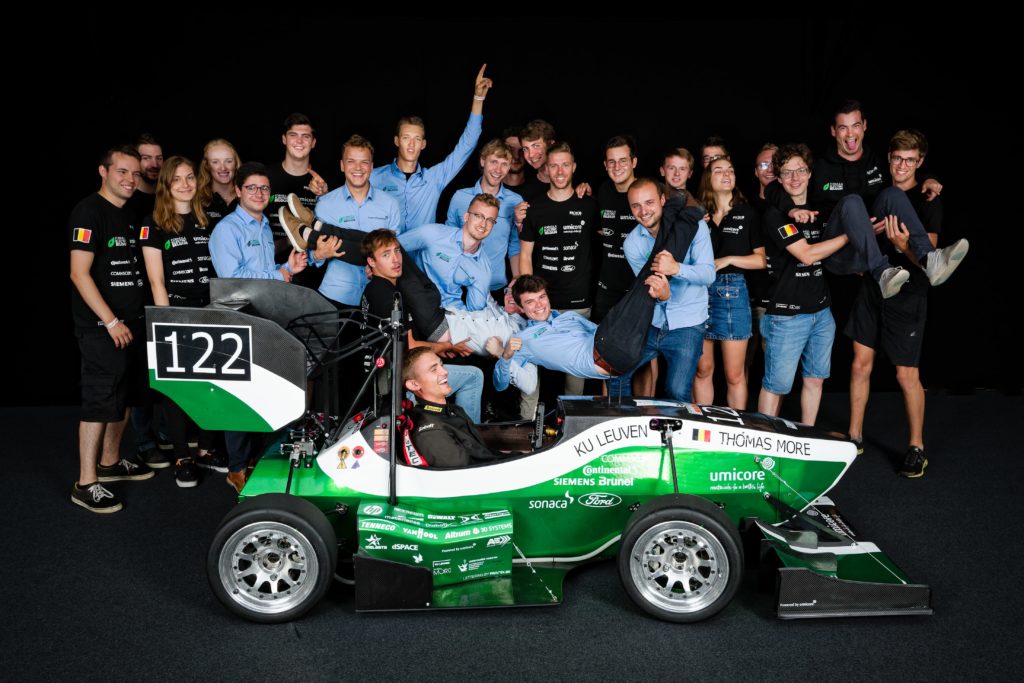 At exactly 8 o’clock the convoy departed from Kessel-Lo to the Hockenheimring in Germany. After a drive of almost 4 hours, we arrived at the legendary circuit and carved a way to the campsite through the vans and trailers of the competing 120 teams. Once the paperwork of the registration was over, the construction of the pitbox began. With our experience built from the Netherlands and Italy, this had become a routine and we finished the job in no time. Now we could discuss the strategy for the scrutineering of the following days. 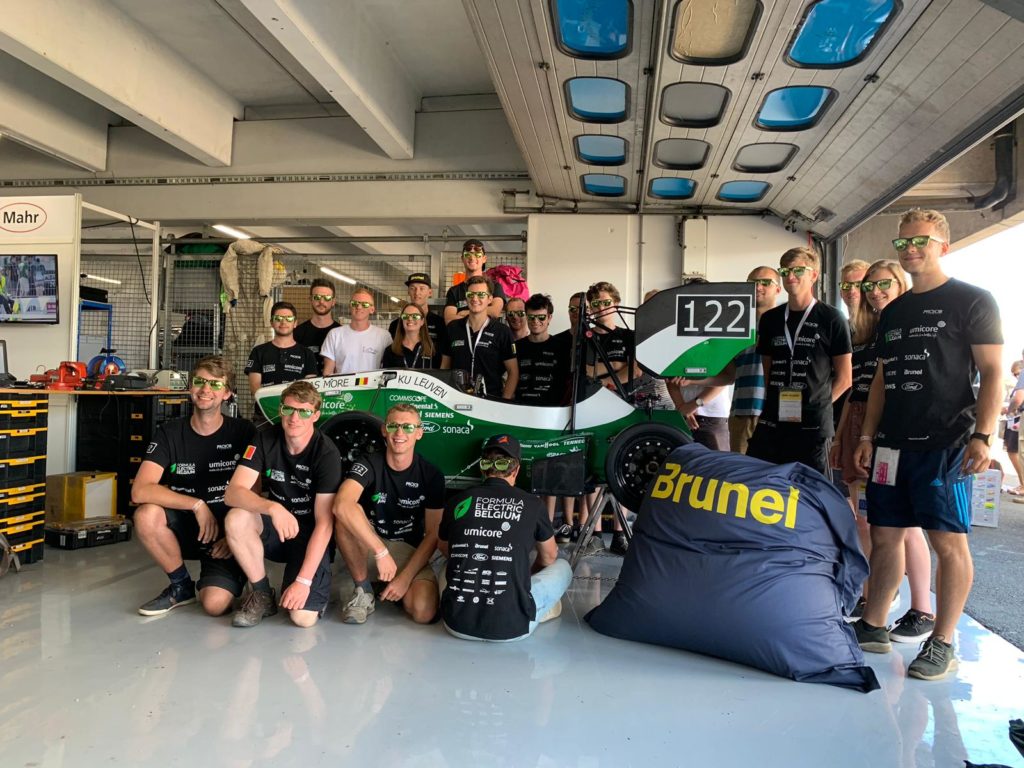 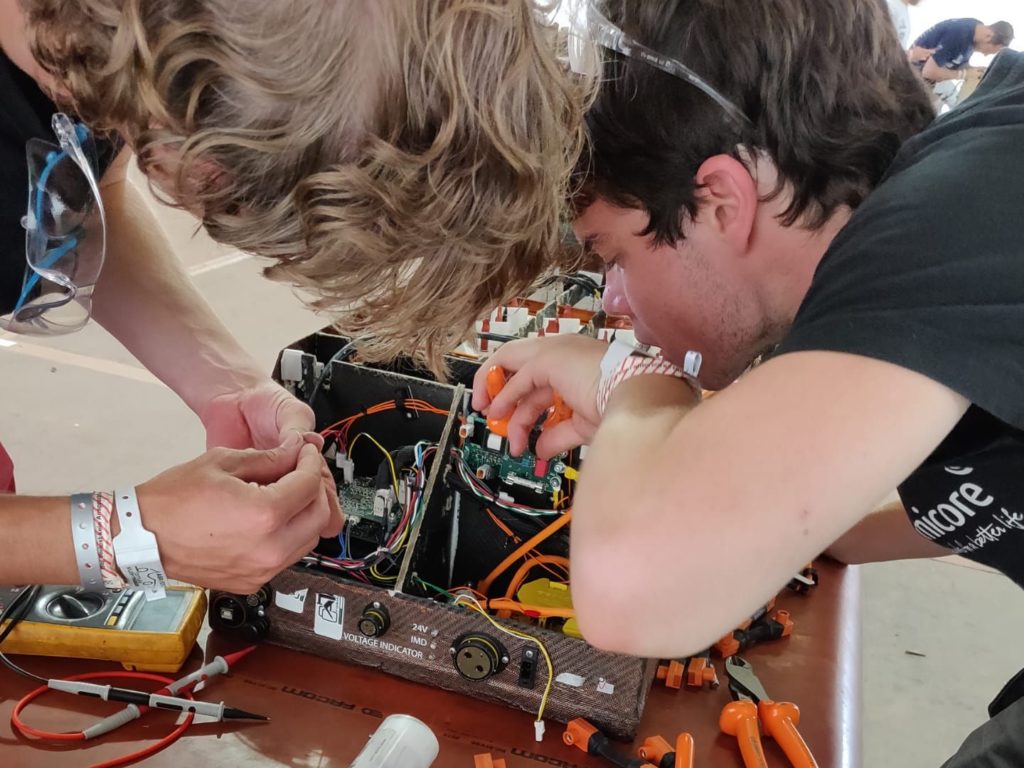 At FS Germany, scrutineering starts with checking the tires, racing suits and the egress test for the drivers. This all went smoothly and we were allowed to go to the mechanical and battery inspection. Apart from a few minor remarks, everything was fine and we gathered our first scrutineering stickers. The scrutineering bay and pit-boxes closed early as the opening ceremony was scheduled. Once again the size of FS Germany became clear: 3,383 students from 25 countries and 450 officials gathered in the marquee located above the pit boxes. 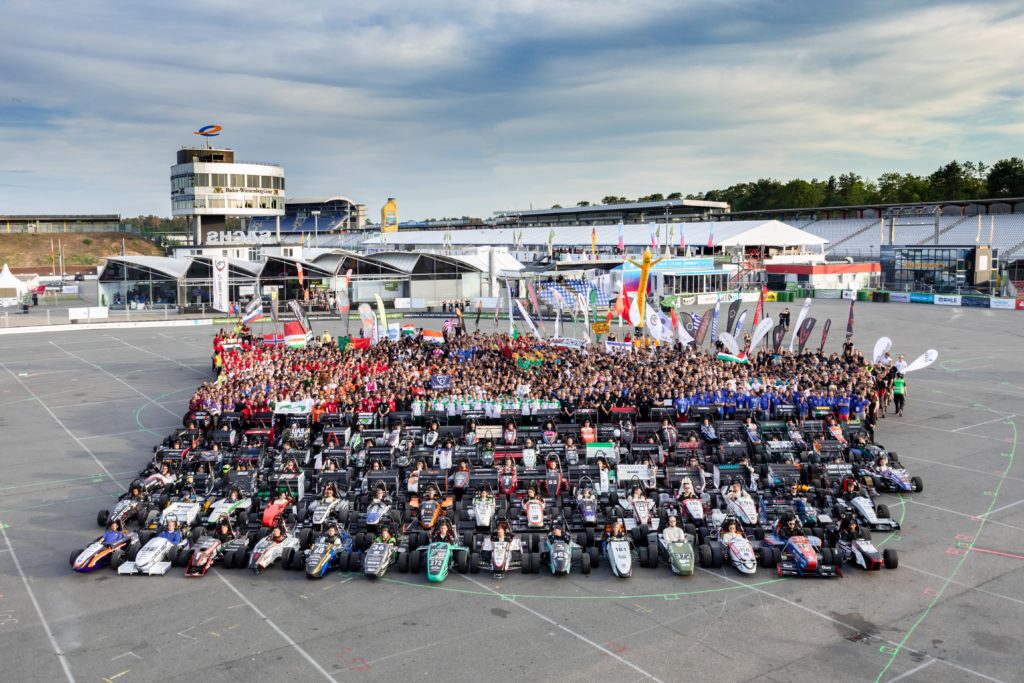 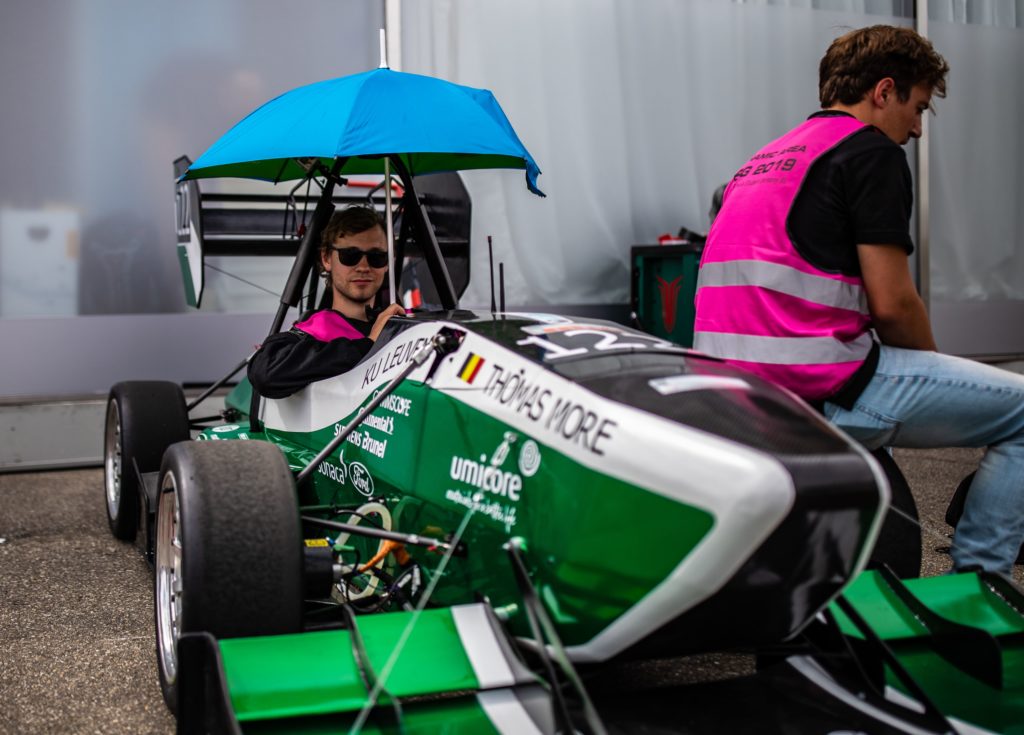 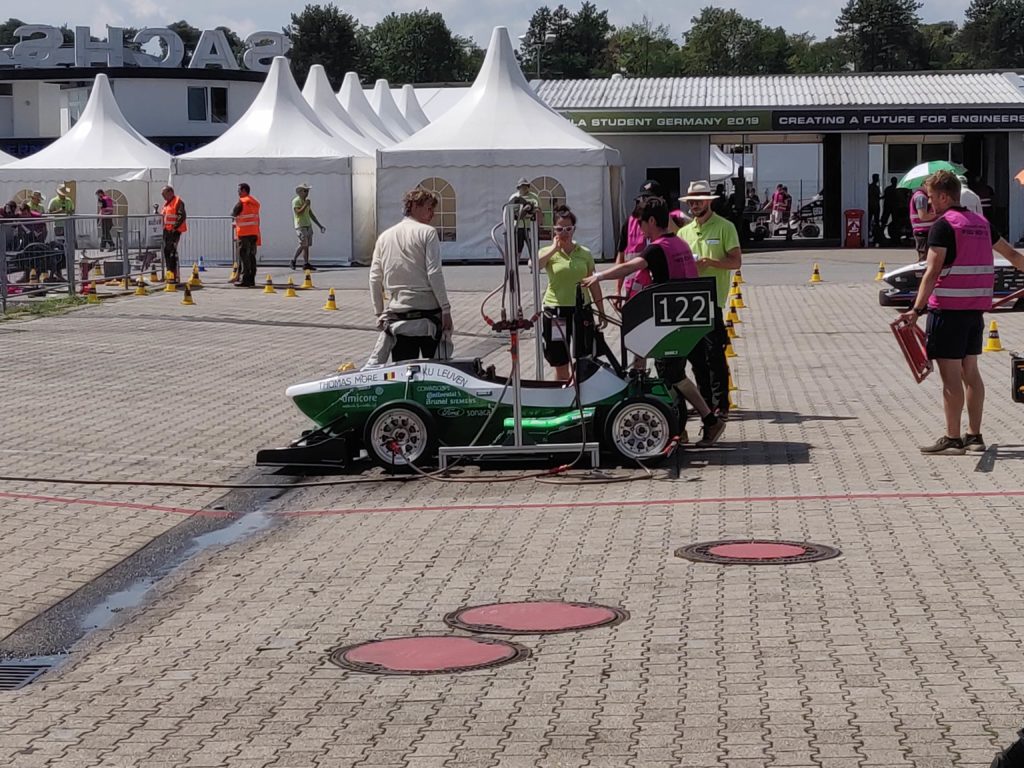 The third day started with cleaning the car for the “Engineering Design” and the “Cost & Manufacturing” event. FSG is known for its very strict jury members for these events and the team had to do everything in its power to convince the jury of our capabilities. The Business Plan event followed later in the afternoon.

Despite the fierce competition, Formula Electric Belgium managed to stay strong and secured a place in the top 20 of the static events. With these static events behind us, the focus shifted back to scrutineering. The inspection went smoothly and at the end of the day we also passed the electrical scrutineering. 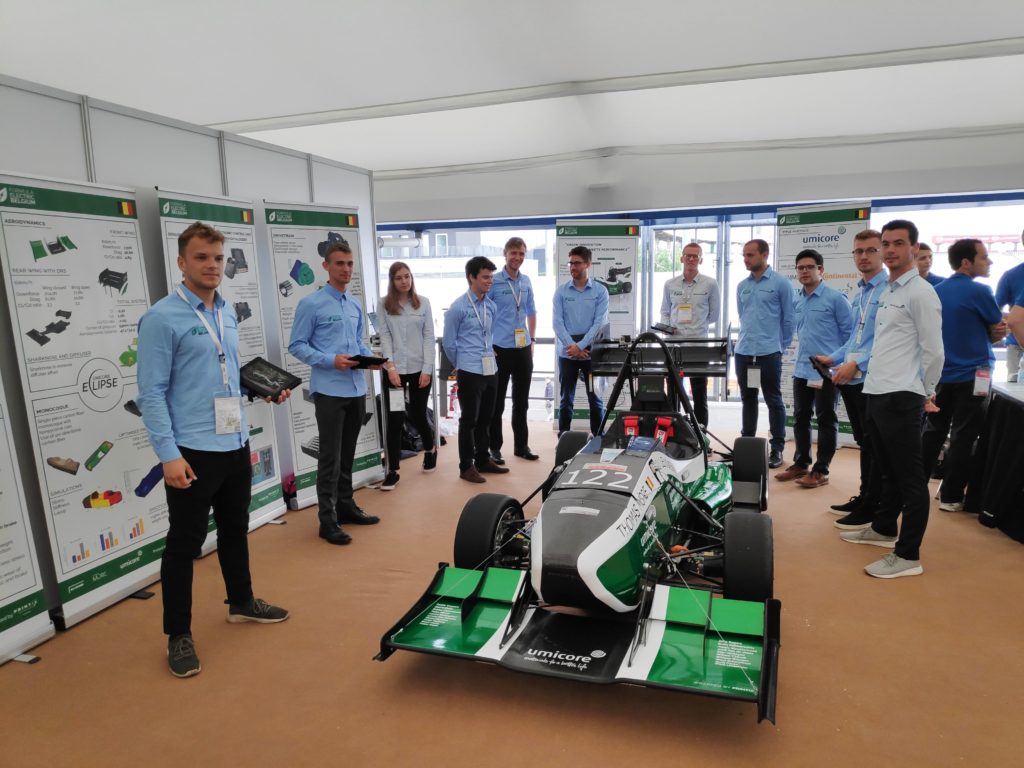 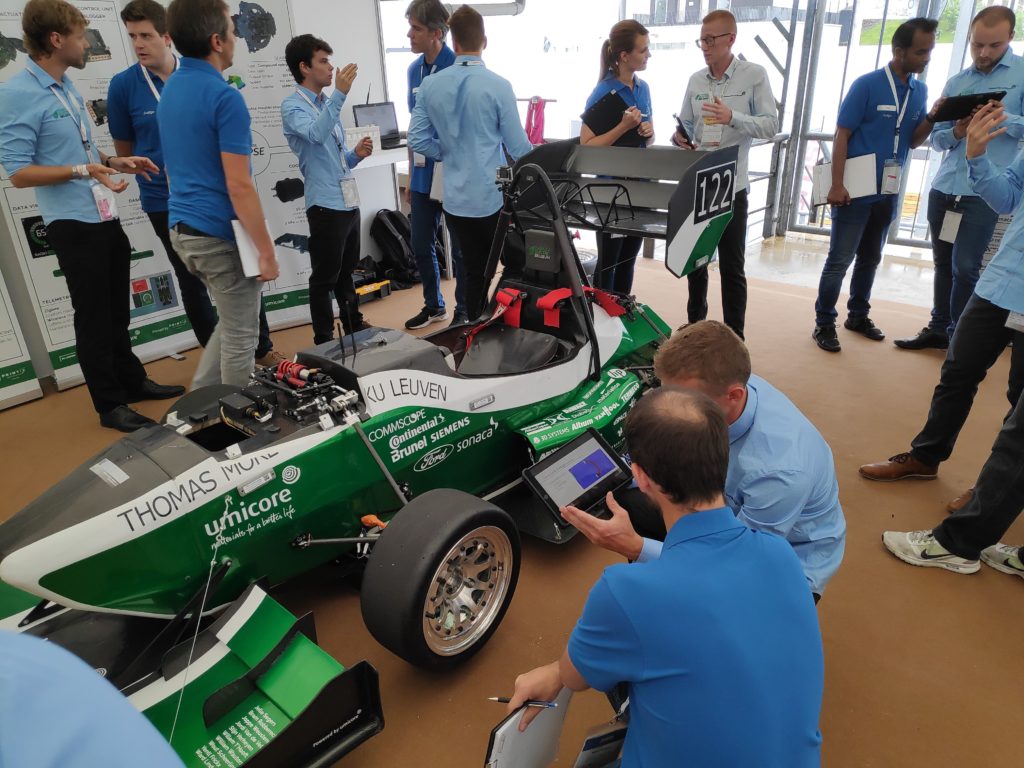 With an eye on the final stickers, we left with good self esteem for the scrutineering bay. We passed the rain, tilt and brake tests in one go so the Umicore Eclipse was ready to hit the track. On the test circuit we adjusted the final parameters for Friday’s dynamic events.

The skidpad was the first dynamic event where the Umicore Eclipse could prove itself. We set strong times but an electrical problem forced us to stop our 4th and final attempt. After this it was all hands on deck to get the car running again for the acceleration event in a few hours. The cause of the problem was found quickly and we could go to the starting line without any delay. During our first attempt, we broke our personal record with a time of 3.76 seconds. With the following attempts, we even sharpened this time to an incredible 3.73 seconds and achieved a top speed of 116 km/h after just 75 meters. By doing this, our Umicore Eclipse finished in 5th place! 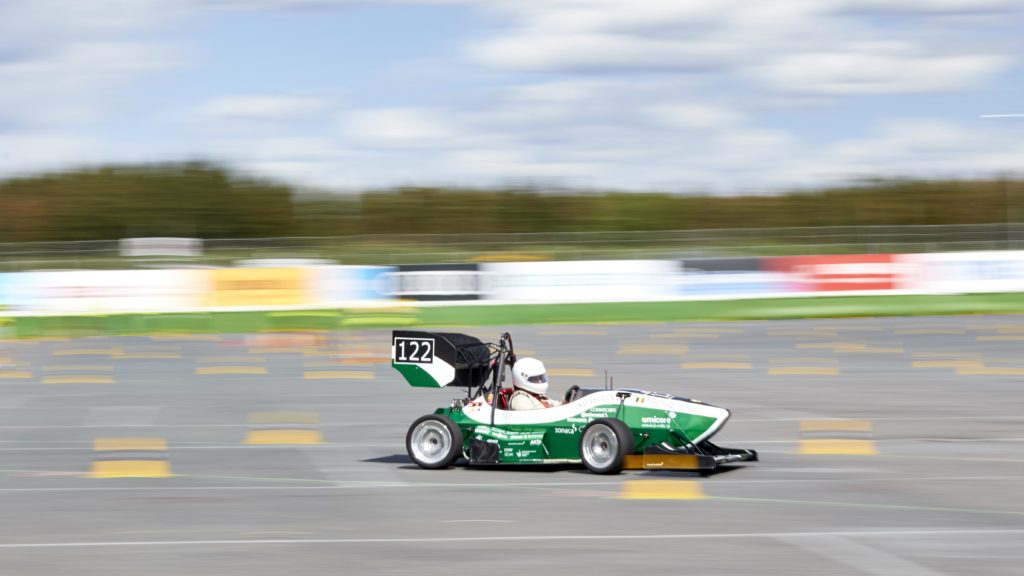 The autocross event took place in the afternoon. This gave us the time to adjust some suspension parameters for a better driving behavior. After a long time it was finally our first driver’s turn. Brent drove strong times on this technical course, but the level of our competitors was very high. That is why we made the decision to not immediately make our second attempt. We let the track warm up and build up more rubber so that our tires could generate more grip. This tactic turned out to work and we improved our time with a well-earned 3 seconds.

After the good results of the past few days, we were confident at the start of the endurance race. We opened strongly and consistently set fast lap times. The data we could follow along the sidelines also looked promising. The battery pack held up well and the temperatures of the engines and drives remained under control. On live telemetry, we saw that the 2nd pilot could start with around 60% capacity of the battery. The pilot was therefore able to push the car to its limits without any problems. Then disaster struck; a flat tire pushed us to the sideline with only 4 laps to go. The race was over and the team’s disappointment was huge. Dispite the setback during the endurance race, the team could be very proud of the results we had achieved last week: a top 20 in the overall ranking, a final place on the innovative 3D printing award and nothing less than a 5th place on acceleration!