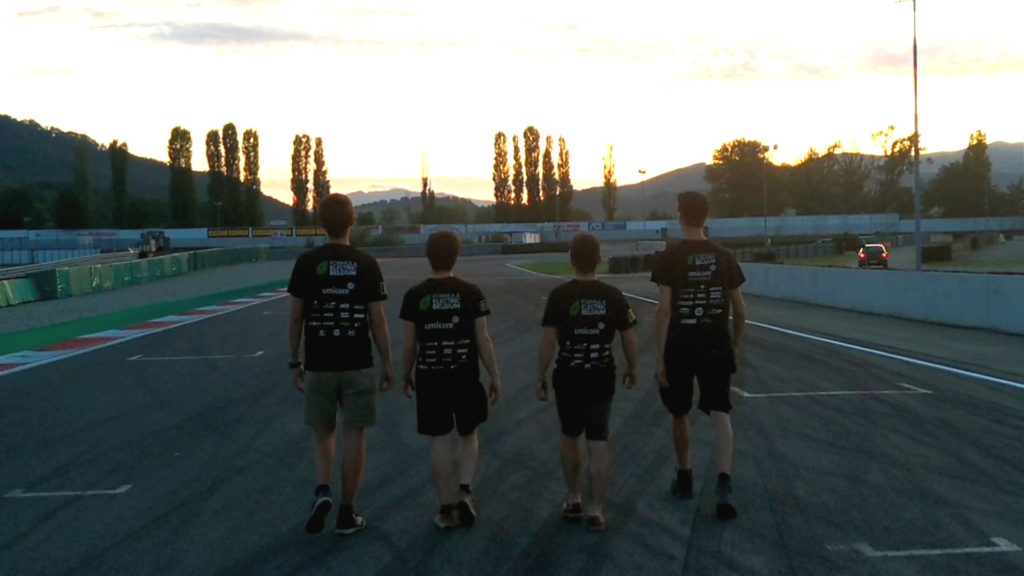 Wednesday:
After a trip of almost 1300km, the team finally arrived at the Autodromo Riccardo Paletti, named after the deceased Formula One pilot. Next to the 1800m long track, the pit boxes opened at 8.30 a.m. and the 15th edition of the Italian Formula Student competition had officially started. During the next 5 days Formula Electric Belgium would compete against more than 2600 students of 80 different universities originating from 27 countries. After we set up our pit box, the team made the first preparations for scrutineering the next day. After a sweaty day in the pit box, we all went to the opening ceremony at 9 p.m. 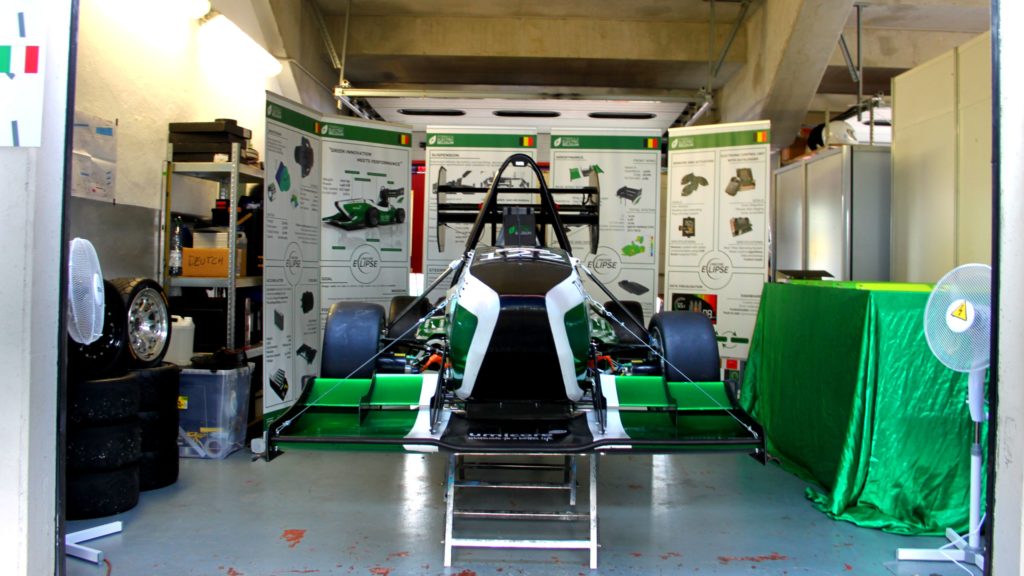 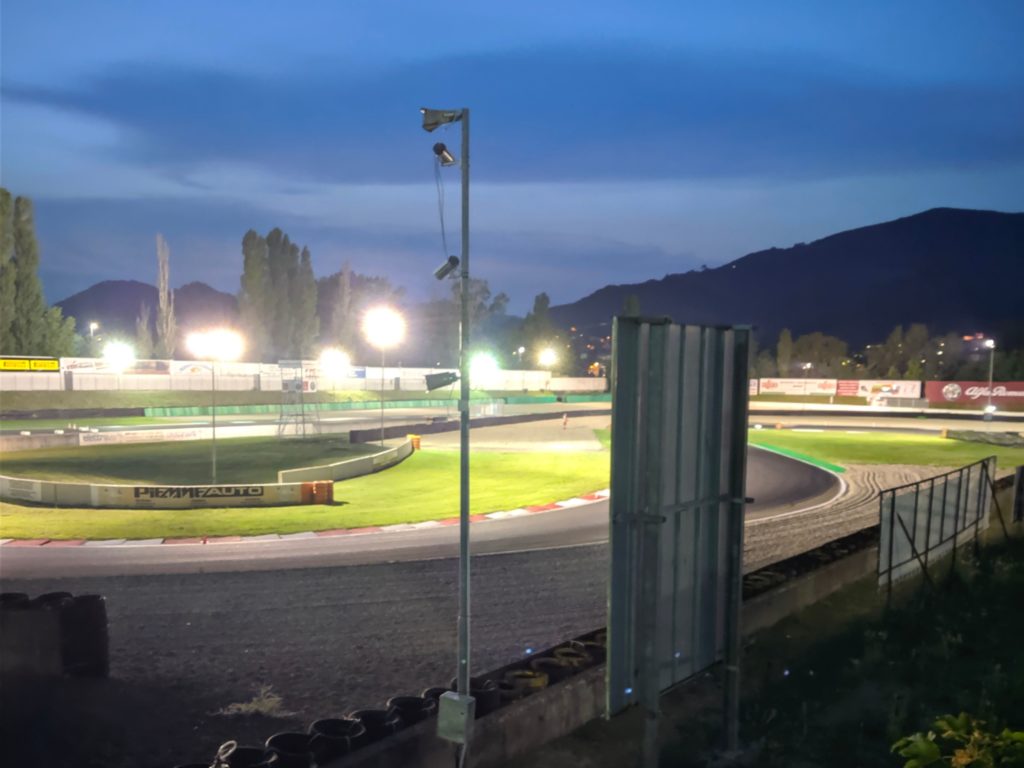 Thursday:
During the second day of the competition, temperatures rose above 30°C early in the morning.  Reluctantly our driver hoisted himself in his fire-retardant underwear and racing suit to join the queue at electrical scrutineering. Minutes seemed hours under the searing Italian sun, but eventually we were allowed to enter the scrutineering bay with our Umicore Eclipse.  During this first scrutineering session, it turned out that not only the team members suffered for the temperature which almost reached 40°C, also our car showed some unexpected issues due to the hot weather. Because of these issues we got delayed quite a bit and weren’t able to complete the first phase of scrutineering. Besides scrutineering, two of our static events took place on the first competition day. On the heat of day, Louisa and Natan presented their business plan to the professional jury. Just before the closing of the scrutineering bay, the ‘cost & manufacturing’ jury came by out pit for the last static event of the day. After this event, the team worked overtime to fix the temperature related issues and to get everything ready for the resit of electrical scrutineering. Unfortunately, when the pit boxes closed at 10.30 p.m., we were able to localise the problem but did not had a chance to fix it yet 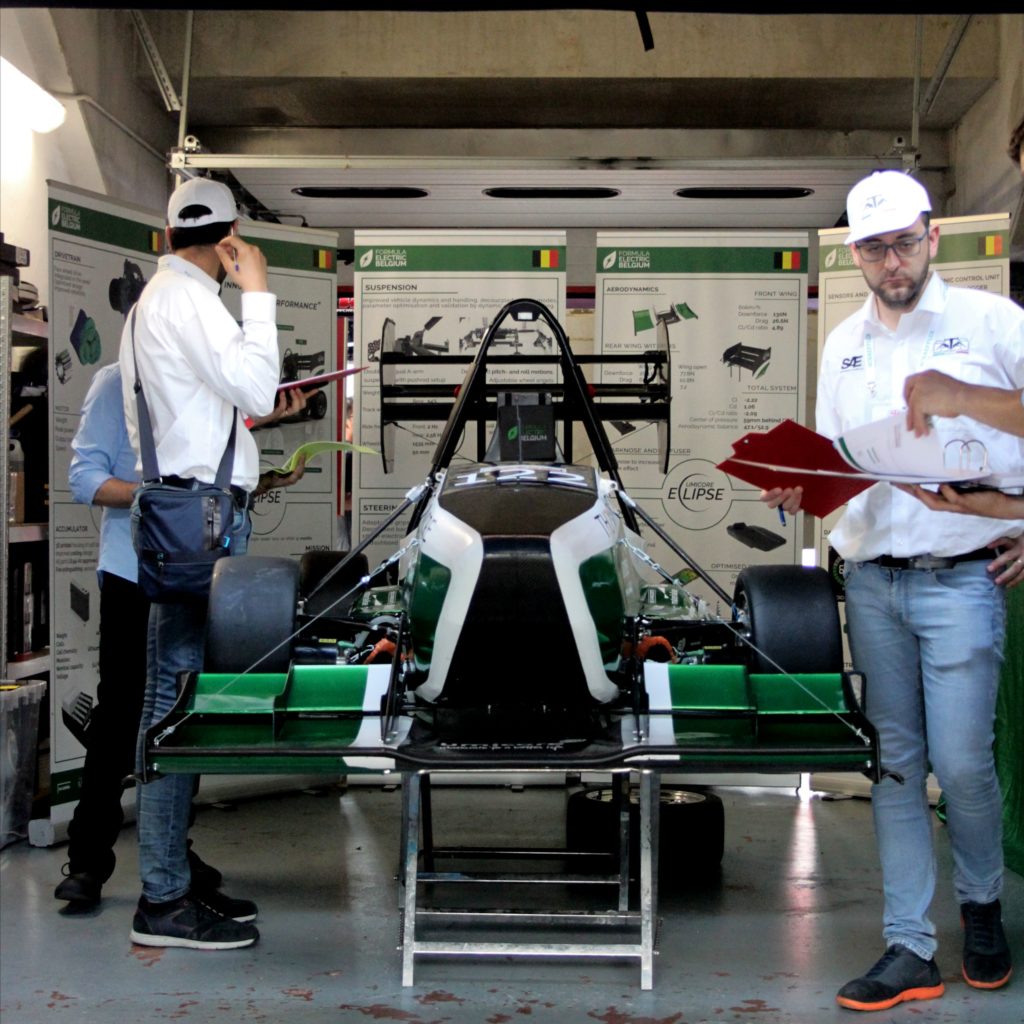 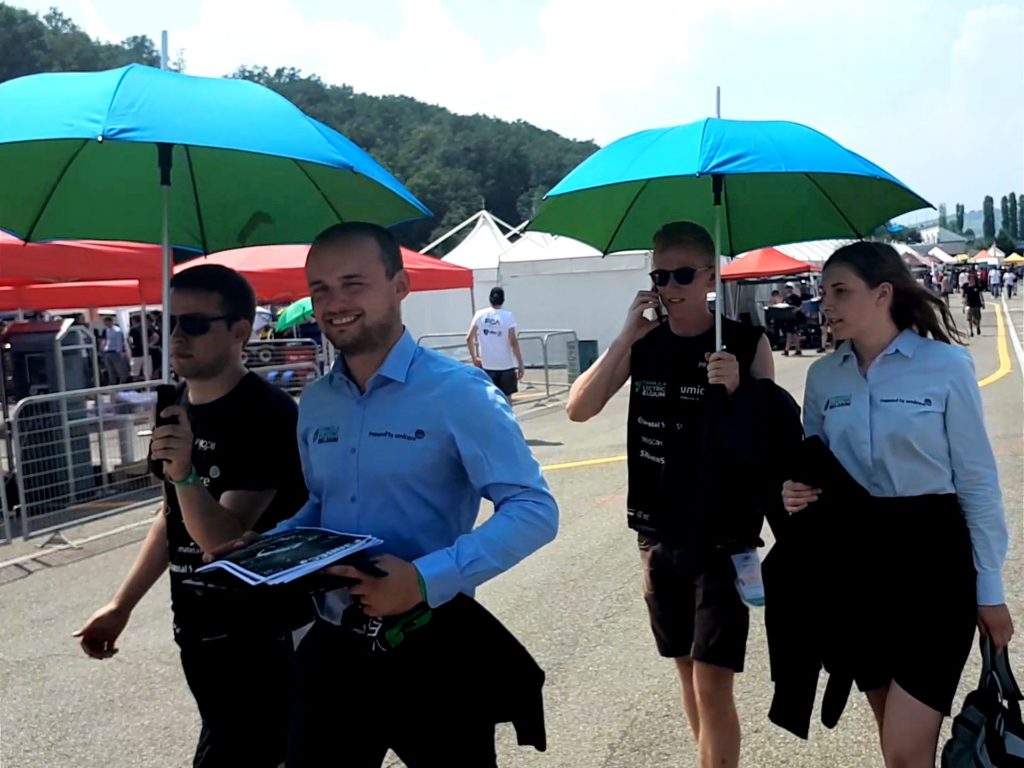 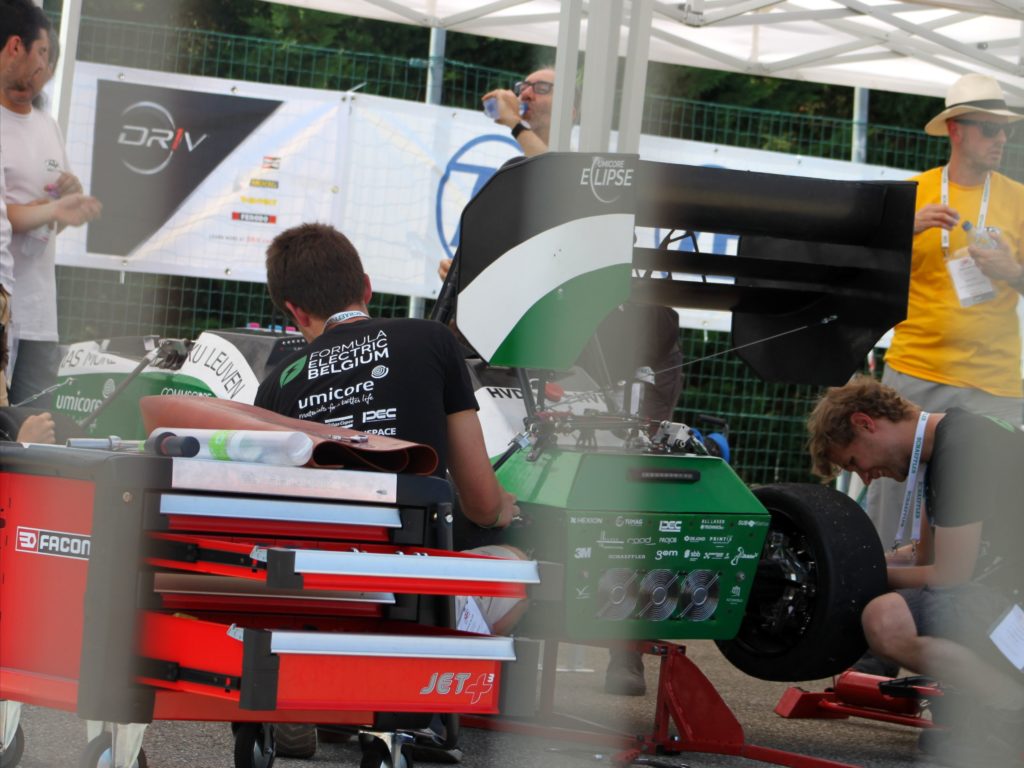 Again the team was woken by the Italian sus, which turned our tents into saunas. After a healthy breakfast and a refreshing shower in the changing rooms of FC Varona, the team was present early in the pit box. The electronics department went all out to return to the scrutineering bay as soon as possible. Just before the lunch break, the Umicore Eclipse was declared electrically save! Now we could proceed to the next station, mechanical scrutineering. After a quick lunch and some hours in the queue, it was our turn to start at this mechanical inspection. Halfway through this process, we had to leave the scrutineering bay, the car was needed in the pit box for the ‘design’ event. The team put its best foot forward to impress the 3-headed jury with our innovative design. When the jury left we had a good feeling about the event and we headed back to the scrutineering bay and we returned with a even better one. The car was pushed back to the pit box with the technical inspection sticker on her nose! After a successful day we returned happily to the campsite. The next day we would need to pass egress-, tilt- rain- and brake test before we were allowed on the track. 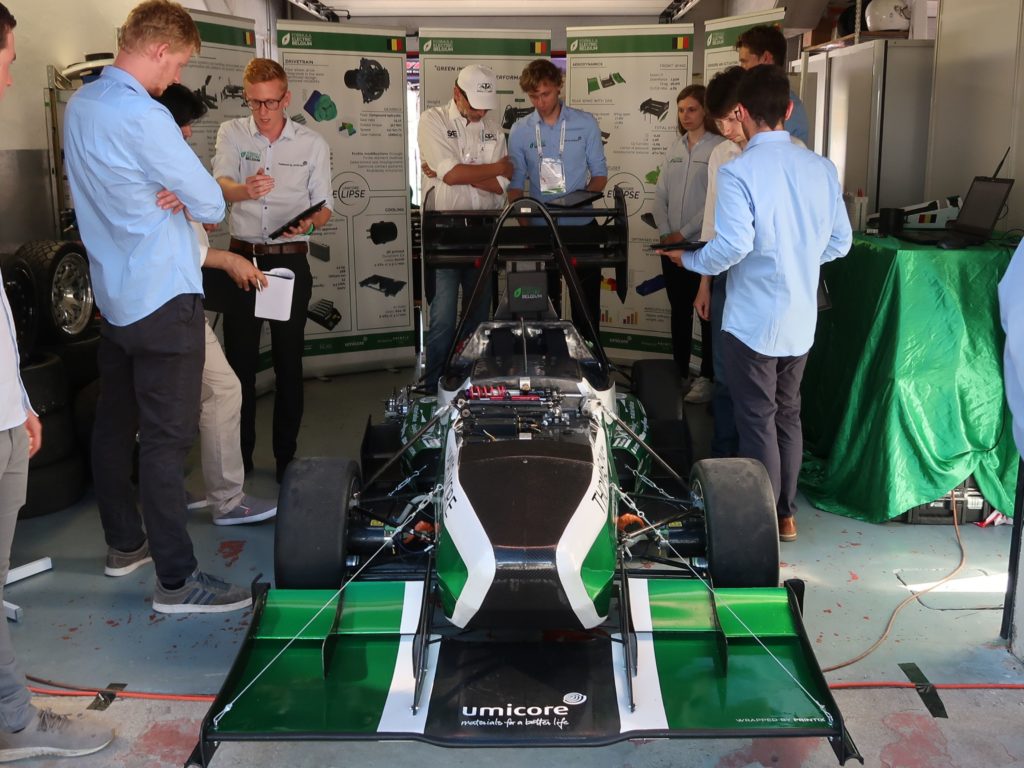 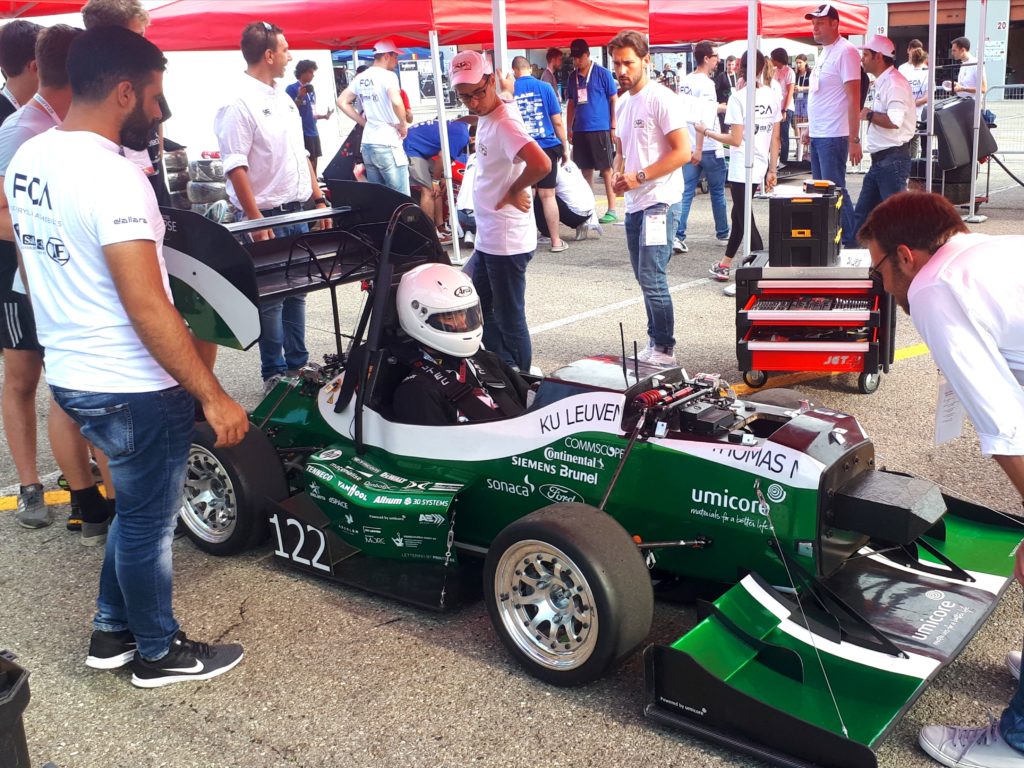 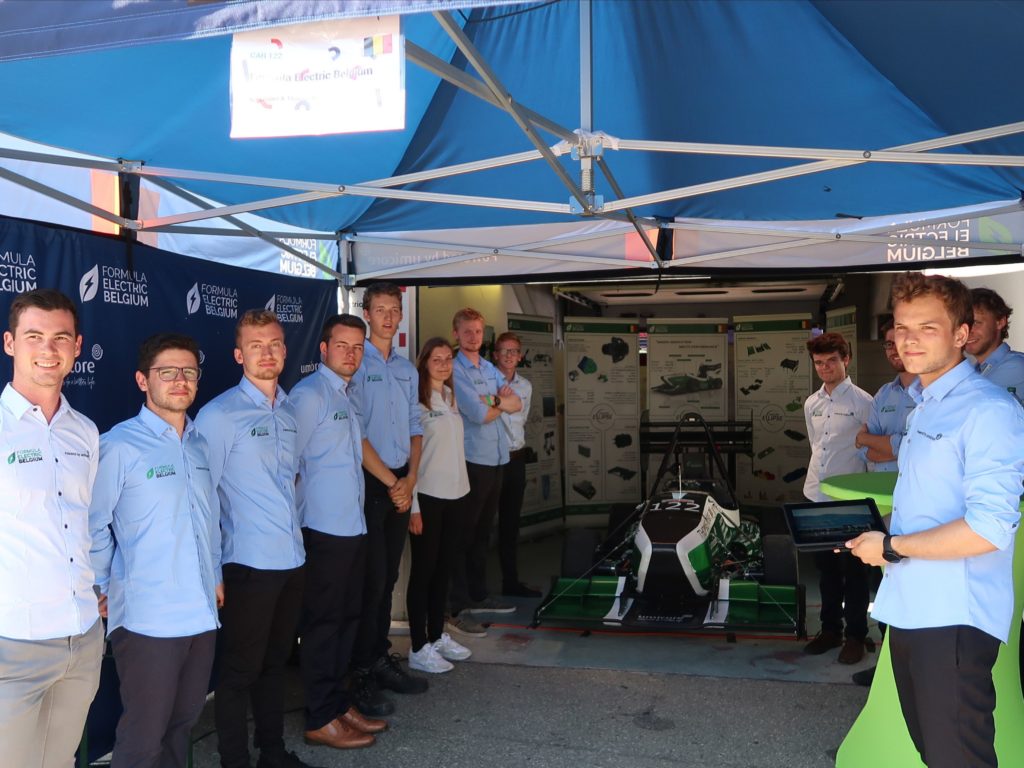 Saturday:
For the third day in row, Formula Electric Belgium stood in line at scrutineering. This time, it was not the car that went under inspection. During the egress test, every driver has to prove he is able to evacuate the vehicle within 5 second in case of emergency. All our drivers passed this test without any trouble. The next stop was the tilt test. A slope of 60° was no problem for out Umicore Eclipse. Time for a shower, the rain test must prove that our car functions perfectly and most of all, that our driver is safe during rainy conditions. This test of 2 minutes was just a small teaser for what was coming later in the day. Heavy thunder- and rainstorms were headed our way. The race against the clock had started to be able to go on track before the storm reached the beautiful city of Varona. We hurried to the brake test with ominous clouds appearing in the mountains. Just as in the Netherlands the brake test went perfectly and we were allowed to go on track. Sadly the weather gods had turned against us and the rain came pouring out of the sky before we could reach the Autocross track.  Time to take of the slicks and put on some rain tyres. In the pouring rain, we pushed our car to the starting line. Before the start signal was given, our driver was already soaked, but he managed to maintain calm. The smallest error in this kind of weather could be disastrous. His first attempt was a bit hesitant. The second attempt however, after knowing the parkours and the amount of grip our car can generate in this awful weather, Gianni did everything he could on the extremely slithery circuit. Of course this time was not as fast as those set in dry conditions, but we could be nothing else than proud of our achievement. 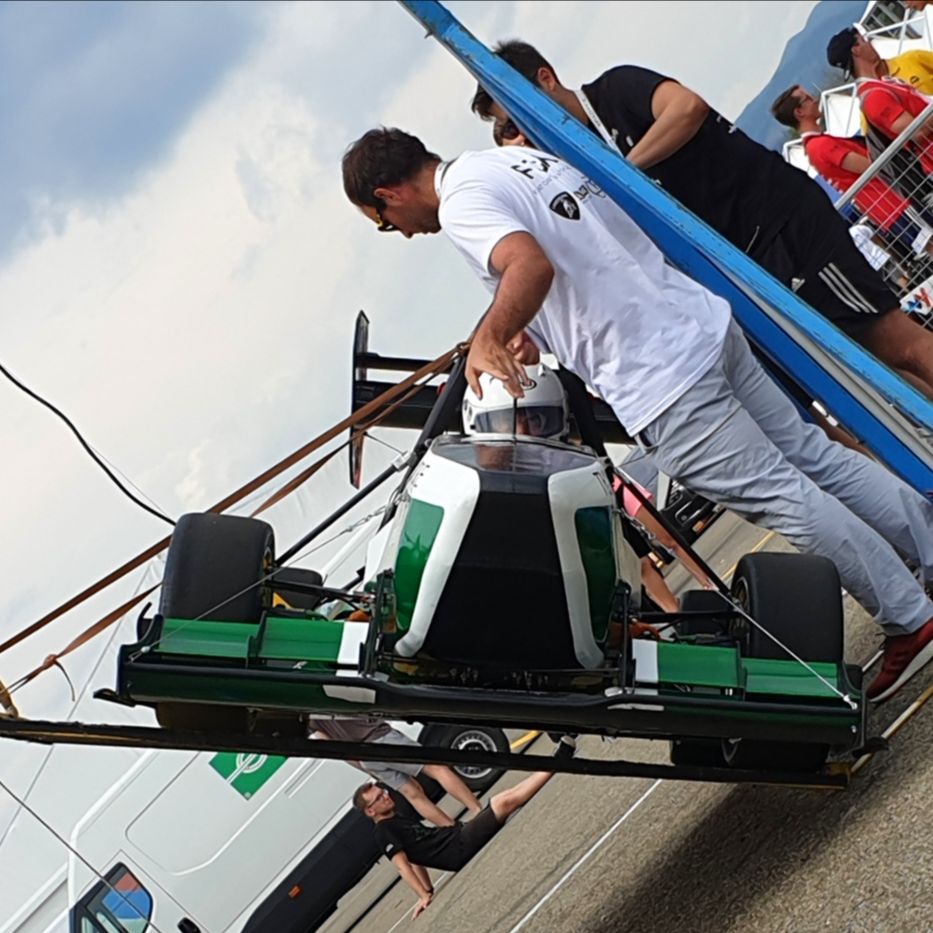 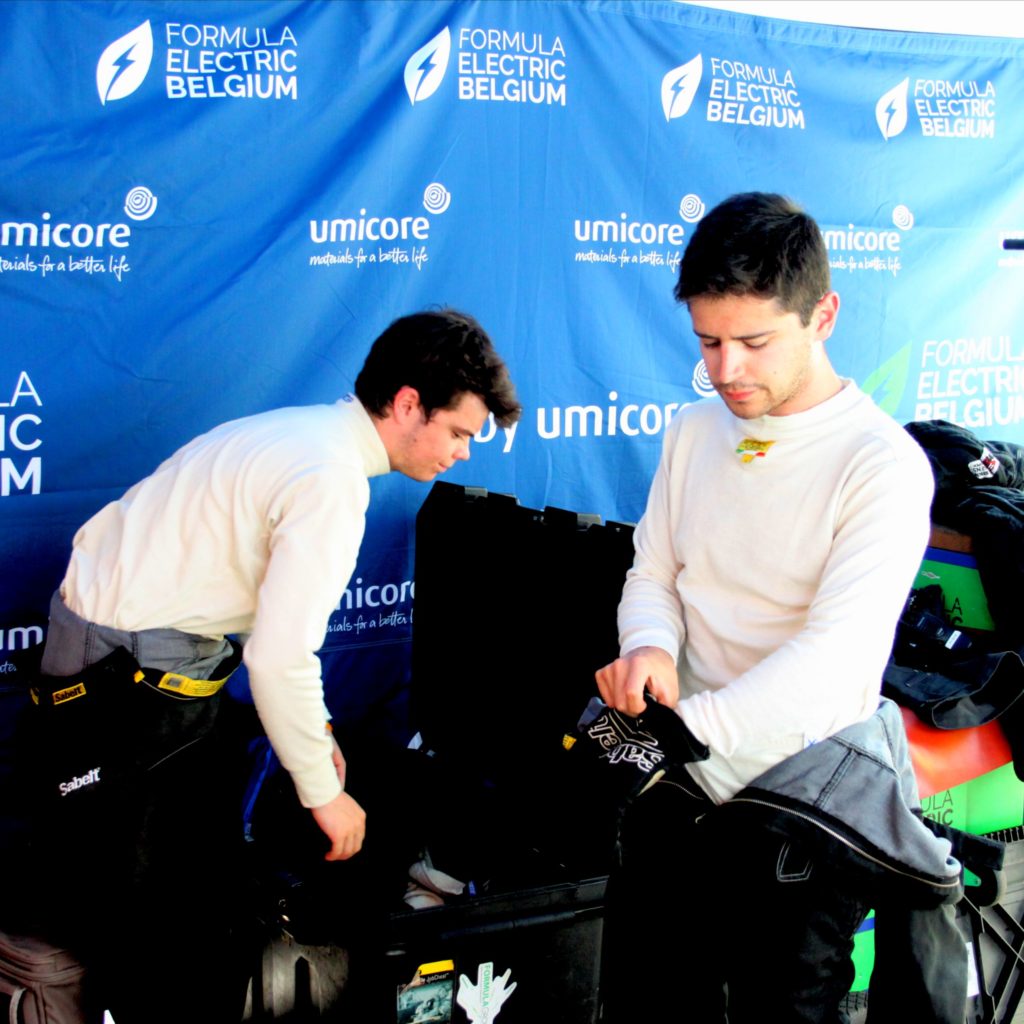 Sunday:
It was something to wake up to crashing thunder and gushing rain in stead of the burning sun. These conditions were everything but ideal to race in. We feared that the organisation might cancel the endurance event because of the huge amounts of water on the circuit. Eventually the rain decreased and the organisation went all the way to get the track ready for the race. The race was delayed with an hour and the tension rose. We waited in our pit box for our assigned timeslot. These slots are given according to the time the team set on the autocross event. We were 8th in line. When we finally got ready at the starting line, there were already 7 cars parked on the side of the circuit. None of our predecessors was able to finish the endurance event. This only caused more stress on the drivers and the rest of the team. Faint-hearted we proceeded to the starting line. The flag went down and here we go. Again the driver had to look for what was possible on the track under these circumstances. After a few laps an error occurred on the dashboard… A malfunction in the power distribution. In order not to damage the inwheel components, we had to make the hard decision to take the same path as our predecessors and the cancel the endurance event. Disappointed we returned to the pit box and started to pack our things. After everything was loading into our vans, we decided to end our Italian adventure on the most appropriate way: with a delicious pizza in the local restaurant! Despite the technical setback during the endurance race, we completed the competition with nice results, also on the static events. With only top 10 scores in a competition against 87 contesters, we can look back at this as a successful week. Now only the award ceremony and we could take the long way home.