Sunday:
The day has finally come, the Umicore Eclipse was ready to leave for its first competition in the Netherlands. After only a short night, the team was ready at dawn for the trip from Commscope to the TT circuit in Assen. We were given the special opportunity to participate in the accumulator and electrical scruteneering on Sunday already. Unfortunately some small issues occurred and we weren’t able to fix them before scruteneering closes. We would have to wait until Monday to continue scruteneering. In the meantime the recruits were setting up the campsite and the other team members installed the pit box. At 10h30 pm the pitlane closed, time for the team to rest after a long day. The next day will start wilt the cost- and design event. 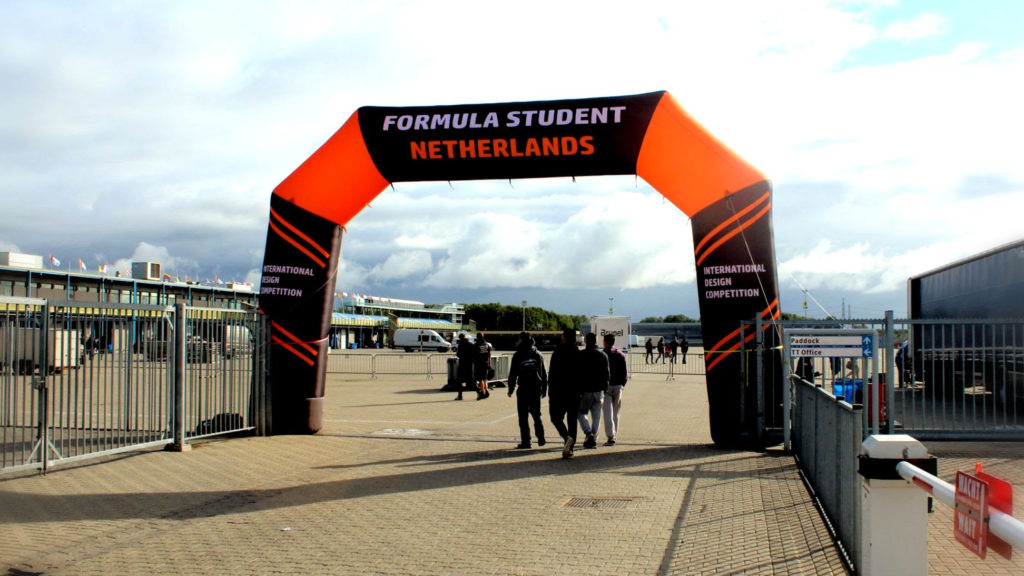 Monday:
On the first day, the static events took place. Early in the morning we started with the cost & manufacturing event. Right after we continued with the engineering design event. After the firts two static events we rushed back to our pit box to prepare the car for accumulator inspection. The boys returned with good news, we had earned our first scruteneering sticker. Now we could move on to electrical scruteneering. However the team encountered a few setbacks. After nice engineering- and teamwork, we were able to pass the electrical scruteneering for 95%. In the meantime, Louisa and Natan defended our business plan to the jury. With all static events completed, the team could fully focus on getting the car ready-to-race! 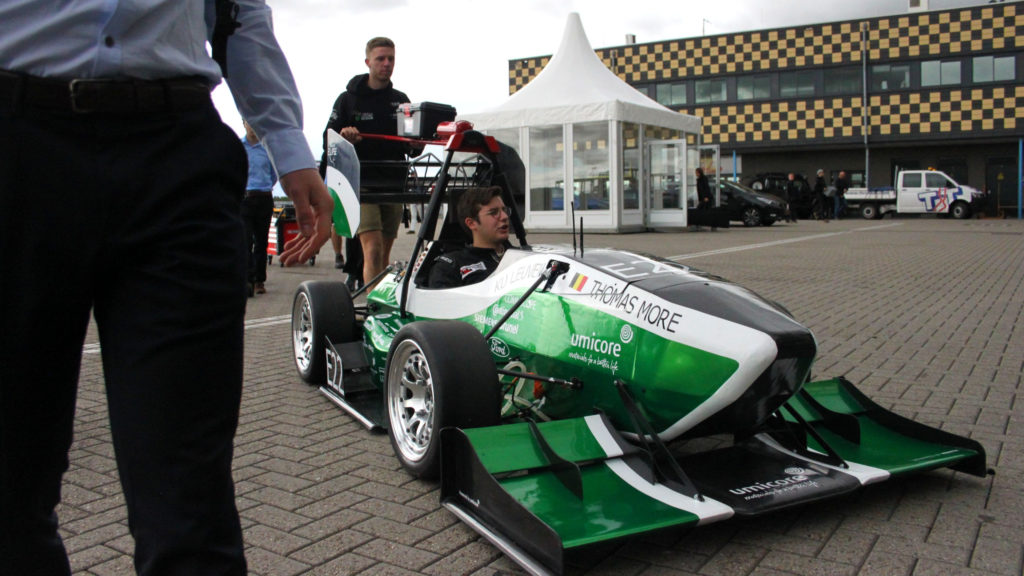 Tuesday:
The problems in the electronics department were harder to fix than initially thought. After a few nightly hours of soldering work on the camp site, Formula Electric Belgium was first in line for the electrical scruteneering. The rest of the team enjoyed a nice breakfast that we won at the Brunel stand. The recruits got to know how Formula Student works, were spectators during the static events and talked to the other teams. To be sure that everything was okay this time, we did a full check-up of the car and hustled back to catch the final scruteneering session of the day. The hard work of today was rewarded. We returned to the campsite with a big smile and a new scruteneering sticker on Eclipse! 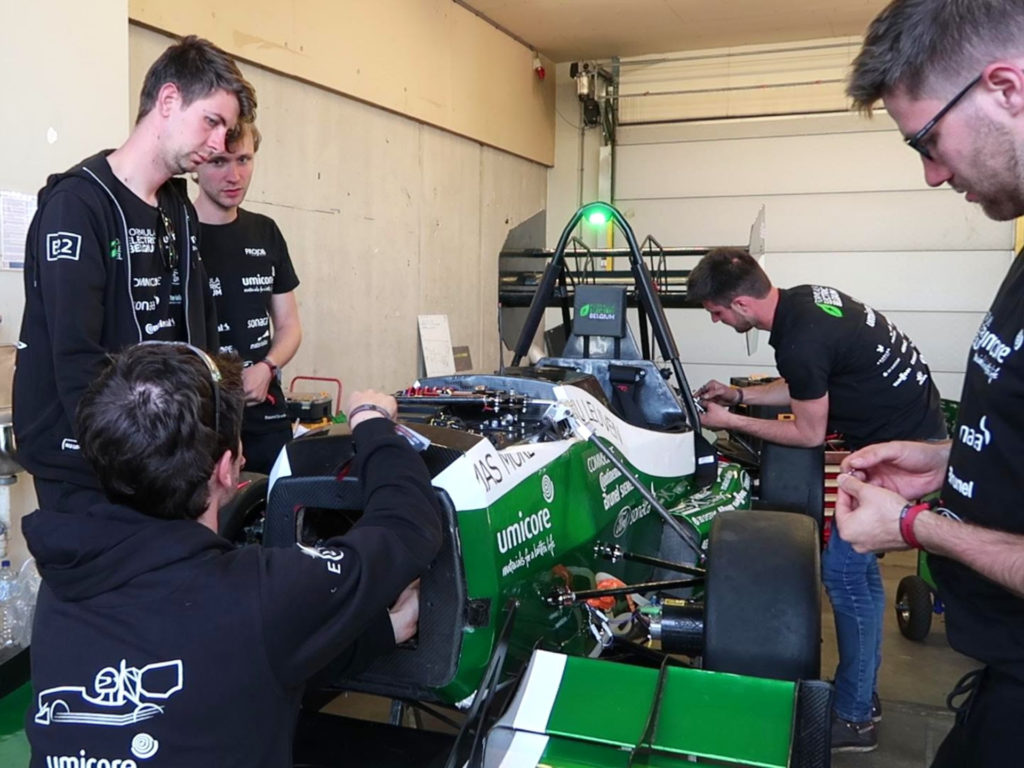 Wednesday:
With all electronics declared safe, we could move on to the next hurdle, mechanical scruteneering. After a quick check in the pit box, we moved on the already very long queue at the mechanical scruteneering tent. If it weren’t for a few millimeters extra on the rear wing, we would have passed this stage from the first try. Back to pitbox, it was. The race against the clock now started.  The long waiting line at the mechanical scruteneering tent remained but the team kept a high spirit. The results of the static events were in and we scored quite well on these. With a 4th place for design and a 5th place for cost & manufacturing, we barely missed the podium. Also with a 10th place for our business plan, we were more than happy. After a second attempt at the mechanical inspection, we passed through to the egress test. During this test, the driver has to prove he can leave the car within 5 seconds in case of an emergency. After passing this test with flying colours (see video below), the Umicore Eclipse was put on scales. With a weight of only 198,5kg, we’ve beaten our personal record. Now it was time for the tilt test. The car was tilted to an angle of 60° to ensure the stability of the vehicle. The four wheels of Eclipse remained firmly on the ground and we got permission to perform the rain test. A soaking shower of 2 minutes must prove our vehicle is waterproof. At the end of this long day, the Umicore Eclipse flaunted with 3 new stickers on its nose. 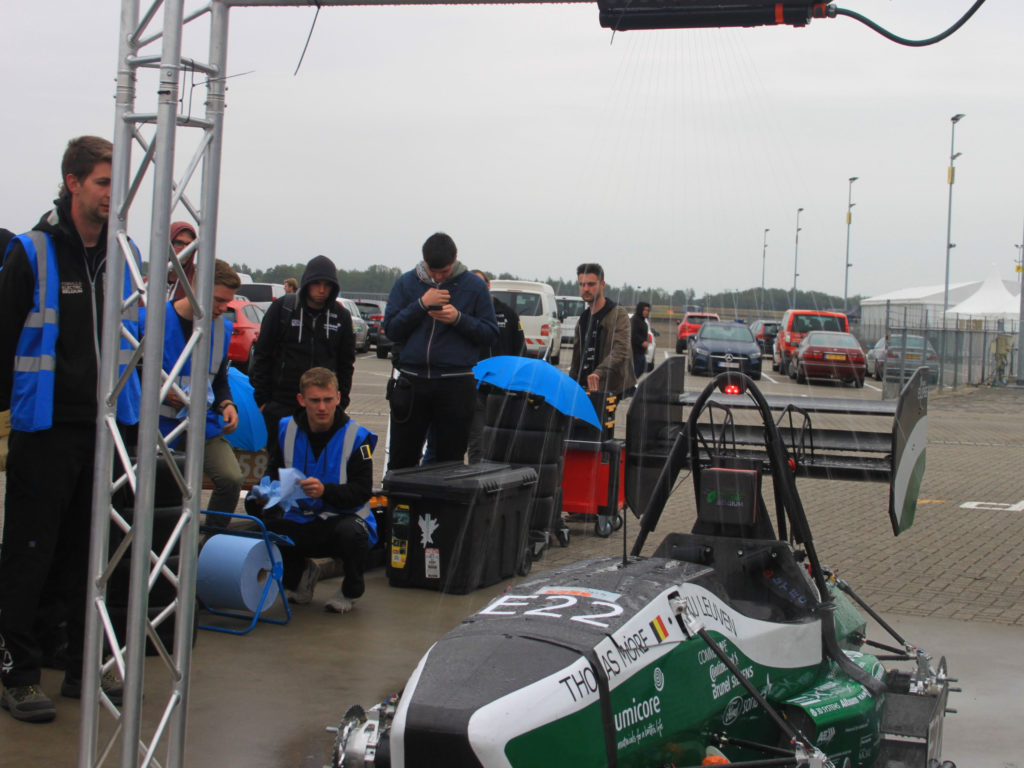 Thursday:
The Umicore Eclipse only needed to pass one more test before she was ready to go on track. A brake test must show that the car is able to come to a standstill even if all electrical systems are shut off. Again a first time pass for the Umicore Eclipse. With the collection of 6 scruteneering stickers, we could finally show Eclispe’s capabilities on the track. Finally the team could enjoy some well earned rest after an exhausting week while we enjoyed the endurance races. After the reward ceremony, we returned to Belgium. Despite the delays during scruteneering, it was a very enlightening week. With all the knowledge and feedback we got during our stay in the Netherlands, we are ready to shine on the next competition in Italy! 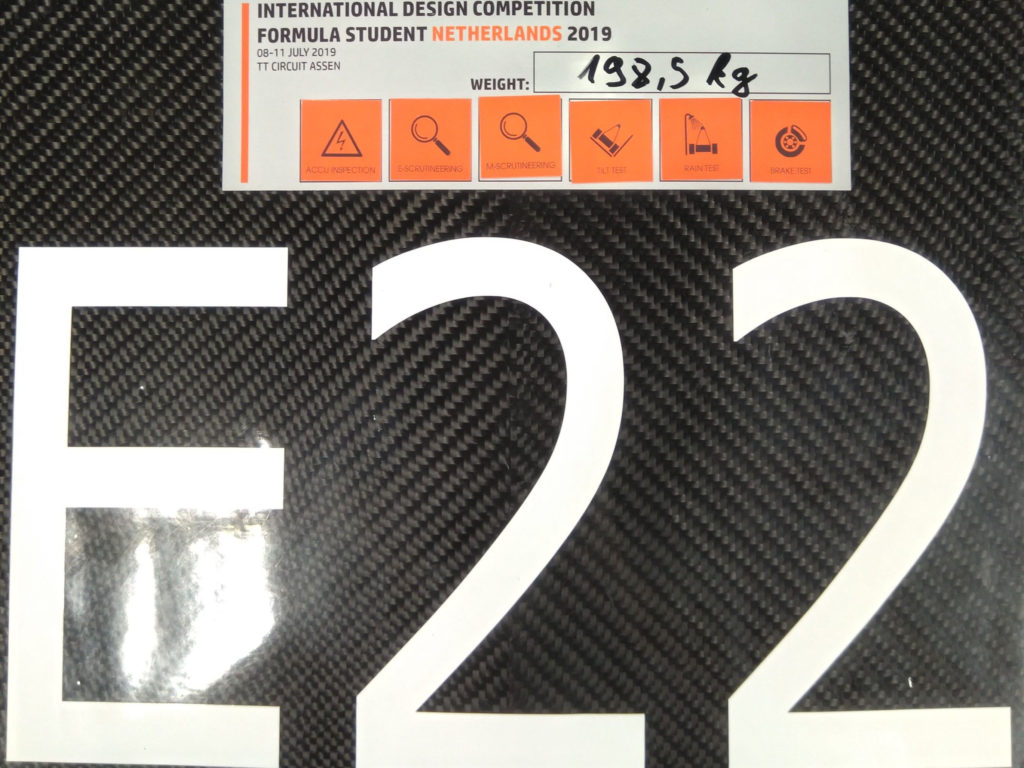